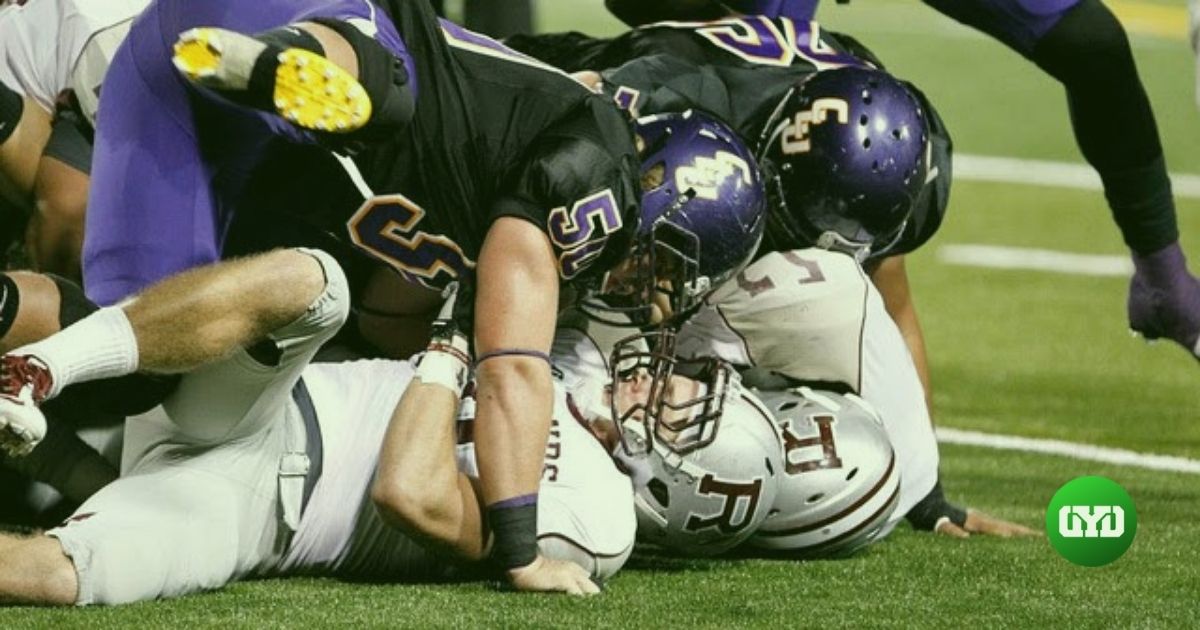 So Pancake Block is a term you’ll often come across in football.

Although having pancakes is often associated with pleasant memories, the Pancake Block is painful to the player who gets it. It’s a term known in American Football circles.

But what does it exactly mean?

I’ll show you step by step what Pancake Block is. By the end of this article you’ll be able to fully understand this Football term.

Before digging deeper, it’s essential to go over some statistics, showing the significance of this term in football. You’ll get a better understanding of what it’s all about.

The offensive line coach and offensive linemen collaborate with each other to block a defensive player who lands on his back, creating a hole for the running back to sneak through.

It signifies domination the moment that the offensive lineman shows to the defensive who’s the boss.  It’s a confidence booster.

How Pancake Block was invented

It’s not an official term used at any football level.

You’ll come across it in football magazines (especially in the comments section) or forums where fans chat about sports including football.

It was the legendary Bill Fralic and his dominance in every game in 1983-84 season forcing them to land on their back with his strength inspired the Pittsburgh Panthers to come up with a term that spread like wildfire across the world.

Today, is a pretty well known term among football fans.

The significance of stats

What are the stats that reflect the performance of offensive linemen?

Quarterback’s performance is assessed by the distance they cover and touchdown passes while running backs are also rated by their yardage and reception total is indicative of the receivers’ performance.

Pancake block comes in handy as a stat to assess offensive linemen’s performance and help the coach make better decisions in future games.

How the Pancake Block is executed

We go over it step by step below.

1. Start with putting your hand on the ground

Your body should be in a three-point position, and you should hold your weight on the hand placed on the ground.

This will assist your body move forward.

2. Be quick on your feet

Once you’re done with the snap, it’s time you jump fast out of your stance and aim at the player you’re designated to block and push on the upper body to enable execute a successful pancake block.

Now, you should force your opponent to lose his balance by lowering your body near the ground and simultaneously push back.

A top trick is to keep your head high, making your opponent not give them the option to push you to the ground by nearing your helmet.

Keep moving forward and your arms near your body to get the leverage you need to knock your opponent onto the ground.

By keeping strong and pushing your opponent up and back you’re halfway there, the last crucial step is to move your hips in a way to force them land on the ground.

6. Execute till the end

Once you force them off balance and start falling to the ground, go all over them and push harder – the aim is to be on top of them, helping your teammates gain invaluable yards on this run.

Where to find Football pancake GIFs

One of the best ways to fully understand what the Pancake Block is in football is to watch a few GIFs.

This link will direct you to a page with plenty of them.

How often should a team use the Pancake Block

The Pancake Block is excellent for a team to gain yards on the run and also works as a confidence booster for the team executing it, seeing their opponents lying on the ground unable to help their team defend.

But it’s wise to use it in moderation; if your team is reputed for being masters at it, odds are your opponents will come up with a plan to stop it.

On which plays the Pancake Block is executed best?

There’s a time and a place for a team to execute Pancake Blocks, and many argue that it’s best performed on running plays as the team can build up on their forward momentum.

Another situation is when one of the guards moves freely around the formation, allowing him to gain a couple of yards and strongly bump into his opponent.

Which positions get the most blocks?

We’ll go over the three most common positions who get most such blocks throughout a season.

You’ll be able to pretty much expect who’s going to end up with the most pancakes next time you’re going to watch a football match.

One of the reasons they end up with many blocks is because they often break from the line and go to block other defenders.

They build up speed while running downhill and this works in their favour to inevitably win some of those one-on-one battles and gain pancakes.

Their position is to be outside the formation and go one-on-one against the outside rushers.

Like with guards they can get blocks done when running downhill and have the leverage lay out blocks.

Because they are smaller in size (the nature of the position) it’s relatively easy for them to grab their opponents from their upper body, push them back and execute a perfect Pancake Block.

Pancake Block is a term among football fans which doesn’t exist in the official books.

If you consider yourself as one of them, it’s great that you’ve managed to read through the article learning more about it.

Is the Pancake Block legal?

Although it’s not an official term at any level in football, the Pancake Block is legal. So, yes… it’s part of the game.

What is a pancake in soccer and how to execute one?

It’s different to the one in football and doesn’t include knocking onto any opponents. It’s more of how to balance the ball with your feet. If you’re interested and want to learn more about it watch this.

PrevPreviousTOP 6: Athletes That Give Back The Most
NextChilena Soccer: Your Ultimate GuideNext
Read more fam