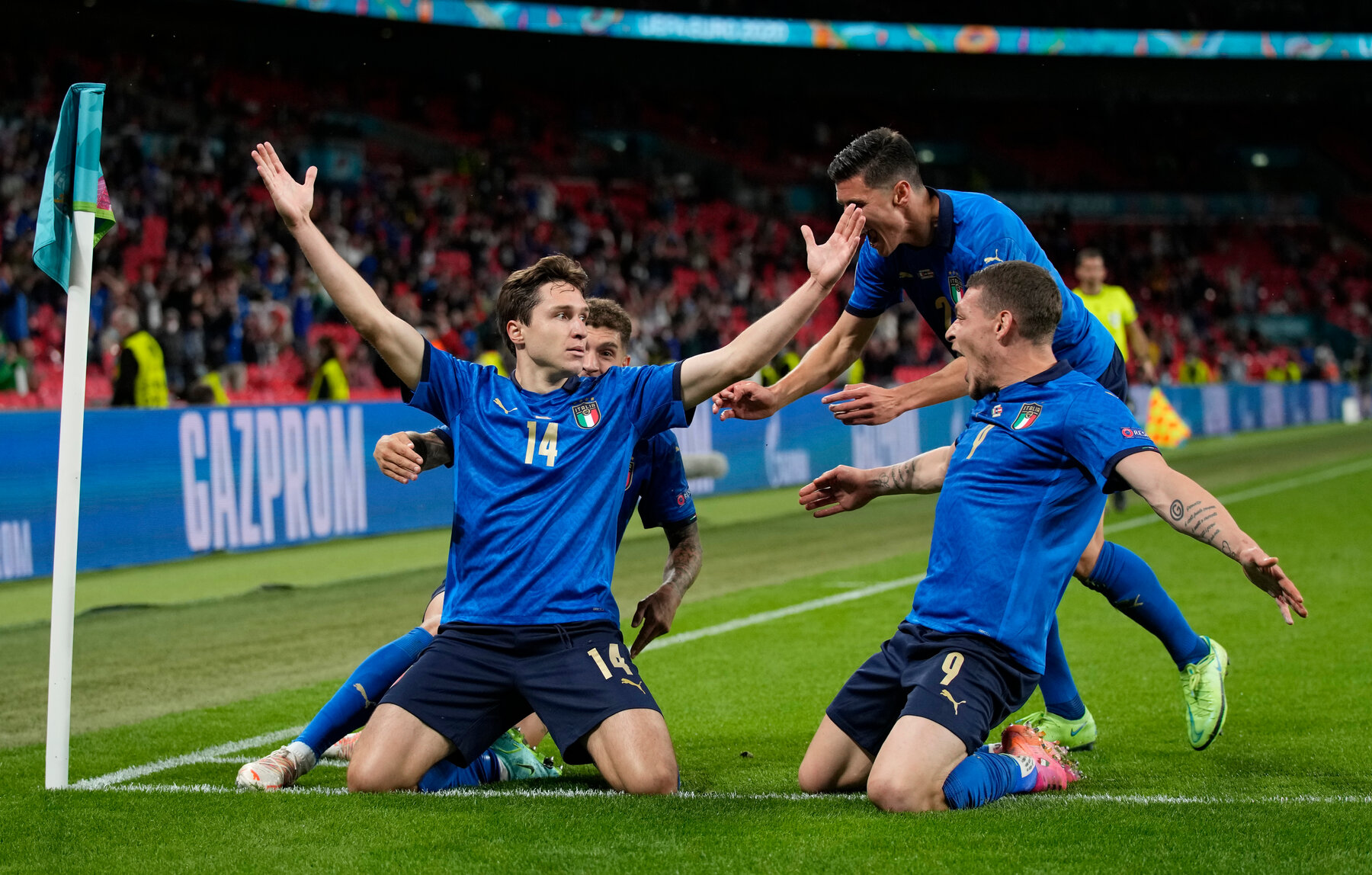 Mancini’s Italy have smashed it in the group stage. They won all of their games so far, without conceding a single goal in regular time. Mancini’s team is great at defending, moving the ball to the opponent’s end and attacking in Italian style: clinical and deadly.

Can they keep up the great work in the next stages? Stick around, we’re gonna chat about Italy and what is next for them.

What happened in the group stage?

It all started with an own goal. Their opening game was against Turkey and Italian were sharp and well on form, winning 3-0. Demiral who plays for Juventus scored an own goal in the 53rd minute and Insigne and Immobile scored one each to seal the win and the three points.

Their next game was against Switzerland – a better team than the Turks and you would suspect they could cause Italians bigger problems. But the result was again 3-0 with Locatelli scoring two  and Immobile wrapping up the victory in the 89th minute. Two wins in two games meant they were the first team in the tournament to go through to the next round. In their third match against Wales they opened the score with Pesina by scoring a foul and maintained the result till the end of the game, hitting nine points without conceding a goal. Pretty good job so far.

You can see real hunger in them. Perhaps the fact that they didn’t manage to qualify for the World Cup 2018 made them really  get their act together in Euro 2020. And here they are now, having nine points and already qualified to the next round.

Mancini, the manager, meticulously selected a mix of players with different skills. Starting off with the goalkeeper, Donaruma – one of the best young goalkeepers – is the first option now, replacing the  legend Gianluigi Buffon. At the back, we find the usual suspects Chielini and Bonucci who play together for both Juventus and the national team for years and years. Their duo has been instrumental in keeping three clean sheets in the tournament.

The midfield offers a great combo of qualities. Jorginho, the maestro, in his favourite role of deep-lying playmaker, helps with the build up while Barella plays box-to-box, starting counter attacks or scoring screamers. Locatelli is a versatile player, quick thinker with a knack for passing accurately.

The Italian attacking players are nothing but sharp. Insigne, known as Lorenzo Il Magnifico is quick, with a top creative flair and technical ability, moves on the left flank creating chances out of the blue. Berardi on the opposite flank is also quick and loves to cut into the centre and score goals with his left foot. Immobile is a deadly poacher, with constant movement off the ball, making it almost impossible to stop him.

A tight win against Austria

Austria gave it all and they came close to opening the score when Arnautovic’s goal was disallowed. Mancini’s Italy got their act together and won the game in extra time, opening the score with Chiesa’s wonderful finish followed by Pessina’s goal. And they now play against Belgium – it’s not gonna be an easy game for the Belgians whose confidence is boosted after knocking out Ronaldo’s Portugal. Can Italy win this? We should just wait and see.

So far so good for Mancini’s Italian team. They finished top of their group and are now a step closer after winning Austria in knockout stage. The question is can they go all the way and win the trophy? Betwinner’s odds are 6.

Who do we got winning EURO 2020? Well, that’s exclusively for our members to know. More information about our premium service inside our Membership section of the website!

If you are not ready to join the VIP Group, we welcome you to check out our FREE sports betting picks to get the confidence needed as we make sure all our followers are able profit.

Our team of sports analysts are posting the best FREE sports betting predictions daily on Twitter and on our Telegram channel.

Don’t miss your chance to increase your chance of winning on sports. Let’s win and celebrate together! 🍻

Tune in Betting, Membership and Sportsbooks section for more valuable thoughts and insights. 🧠